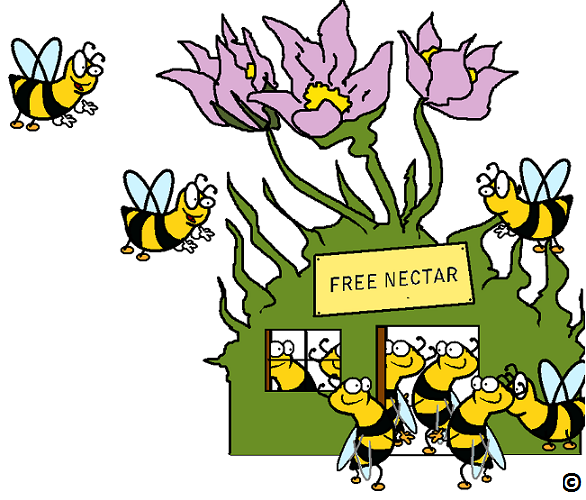 Do you suffer with a sweet tooth ? Slipping one teaspoon of sugar into that cup of coffee is not enough to tantilize you taste buds, you need two, three or four.

Just like humans, bees are programmed to seek out sweet things, to charge up their batteries for day-to-day living.

Flowers know this and lure these busy little creatures into their “shop” so to speak, by serving up sugar loaded beverages with a hint of caffeine.

Day-to-day living is not preceeding smoothly in many bee hives around the world. The official term for the problem is “colony collapse disorder”. Scientists are struggling to understand exactly why the bees are in crisis.

Theories abound…….. bugs, chemicals and poor nutrition, have all been implicated in this downfall of bee society.

Researchers from UC San Diego believe bee health may be on the decline, because the bees have developed a really sweet tooth, as a result of living in a chemical world. And just like their human counterparts, juicing up on sugary nectar, is a recipe for disaster.

Bees in a chemical world

Farmers want bees around, but they want to keep the leaf munching bugs away, so they engage in “chemical” warfare. The chemicals that are routinely applied by farmers and gardeners, have been designed to not hurt the bees directly i.e. the chemicals do not kill the bees.

But it seems the neonicotinoids are able to shape the foraging behaviour of the bees – instead of opting for “normal” nectar, the bees want “super sweet” options on their menu.

The bees became exceedingly fussy when offered sugarwater. Imidacloprid bees were only willing to feed on high concentrations of sugar, refusing low sugar concentrations, considering them to not be rewarding enough to bother with.

The feeling of it not being worth the reward, extended beyond the individual bee, because bee society depends on scouting bees, locating “the goodies” and then sharing the info.

Since the bees felt the food was bland and unappealing, they failed to rouse the troupes – the number of waggle dances performed by bees exposed to imidacloprid dropped between four and ten-fold.

Colony ends up short on fuel

If the bees are being extremely picky about what they will or won’t eat, the bee colony overall can start to run short of supplies.

The day-to-day things start to slip

Maybe. The more carbohydrates you eat/drink, the more carbs you want, leaving us hungry for “nice” things. Insulin spoon

But that hungry for “nice” things leaves us struggling to use fat as a fuel source, so we end up with a cupboard full of fat which we can’t access. Just like the bees we end up short on energy despite living in abundance.

To tame the sweet tooth – start by cutting those carbs.

Interested in learning more about the chemistry behind those sugar cravings  ?

Subcribe to E-spoons, to get e-mail updates once a month to learn how to keep your body chemistry balanced so you can resist that love of sugoooo-gar.