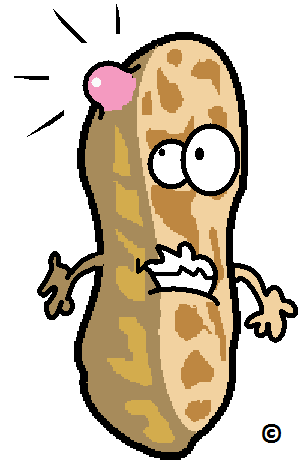 All foods are made of proteins, but peanuts have a rather ugly looking protein which protrudes from them known as ARA. The best way to imagine it, is to think of it as an enormous carbuncle (zit) on the forehead of the peanut.

If you’ve ever had a huge big pimple on your face, it is the kind of thing that can be difficult to ignore.

A number of things can happen when you venture out in public with an enormous carbuncle on your forehead. Everyone will notice it.

If you’re really brave, you may manage to control your emotions, but suddenly finding yourself the centre of negative attention, the most reasonable response, is likely to be an emotional outburst. A little crying, a little screaming maybe a little bit of both.

Peanuts may taste good, but from a molecular perspective, they have the equivalent of a big carbuncle on their forehead. The big protruding lump is tough as nails and hangs around. All peanuts carry the giant zit.

In some people, the immune system is polite enough to ignore the ugly pimple, which eventually gets destroyed as part of the normal digestive processes.

But in some people, their immune system is not so well mannered and tolerant of protruding lumps, so when they spot it, the immune system makes a fuss.

The tattle tale and the heavies

The guys who kick up the fuss, are a type of antibody called an IgE antibody. The IgE antibody latches onto the protrusion. It draws attention to the carbuncle, so that the some of the other security guards come over.

A ruckus happens – there is screaming and crying, taunting and jibing. The situation turns really ugly. The security guards, known as mast cells, start shooting their tassers full of histamine, in attempt to get back control.

The histamine wipe out

But when the tassers fire, the little scuffle escalates to a full out war. Other role players in the immune system come rushing in, thinking that the body has been invaded by a foreign army. In the commotion, everyone loses sight of the fact that the problem is just a peanut, with a rather hideous pimple.

If the immune system manages to get perspective, the person may just end up with very red itchy patches all over their body, but if the immune system goes absolutely nuts, it can close up the lungs and shut down the heart and send you into a state of anaphylactic shock.

Anaphylaxis is very serious – if the person doesn’t get medical attention really quickly, they can die.

It seems more and more people have sensitive immune systems, so the number of people with peanut allergies is increasing. Scientists want to find a way to give peanuts a makeover, so that the ugly pimple doesn’t spark allergic reactions.

Biotechnologists give peanuts a makeover to solve the peanut allergy problem.