“Coffee” or more specifically caffeine is one of those chemicals we love to hate. 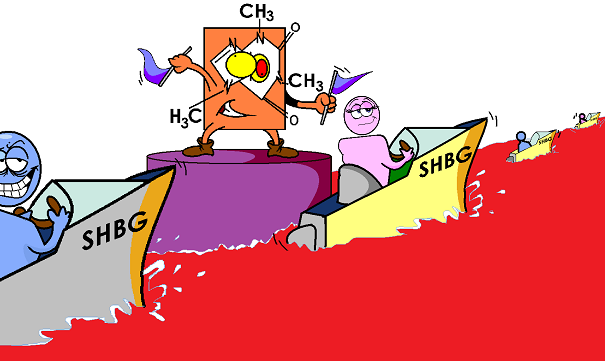 The professional health gurus are always picking on coffee preaching the need to cut back pronouncing it as “evil” personified.  And  yet, billions of people depend on it to jump-start their day and perk up their lives.

Consumption in moderation actually has a couple of health benefits. A fact not heavily publicised.

One in particular which has long fascinated science is the fact that epidemiological evidence suggests it provides protection against type 2 diabetes.   This despite the fact that a cup of joe, drop kicks a little glucose into the system every time we imbibe it, which theoretically should make things worse.

Scientists think they know why

The answer appears to lie in the hormones – no not insulin but the sex hormones, testosterone and estrogen.

Researchers at UCLA have found that caffeine influences the numbers of a special protein whose job it is to carry sex hormones around.  The protein is called sex hormone-binding globulin (SHBG).  Regular coffee consumption increases the levels of this protein.

The finding was reached by crunching the numbers in 718 women, who are part of a big cardiovascular study.  The researchers looked for any kind of pattern between caffeine consumption, SHBG levels and diabetes status.

The pattern they found was that those women drinking caffeinated coffee had higher SHBG levels.  The higher the SHBG level the less likely the women would be diabetic.  The pattern did not hold true for de-caffeineted coffee.

When scientists have looked at the genes of people who suffer from type 2 diabetes and “normal” individuals they have picked up quite a lot of genes which seem to increase the chances that you develop the disease.

Unlike many diseases, the connection is not direct.  The presence or absence of any one gene does not determine whether you develop diabetes because environment is having a major influence.  Your genes give you a predisposition but what you do, pushes you over the edge.

SHBG is one of the genes implicated.

Scientist really not sure quite how these gene is having its effects but sex hormone signalling influences glucose levels.

Enjoy a cup of java

So go on, enjoy that cup of java.  You might want to think twice about calorizing it with cream and sugar but don’t worry too much about the caffeine. The high octane caffeinated beverage is keeping a whole bunch of hormones in check.