Browse: Home / Obesity / Is your antihistamine making you fat ?

Can allergy meds make you fat ? 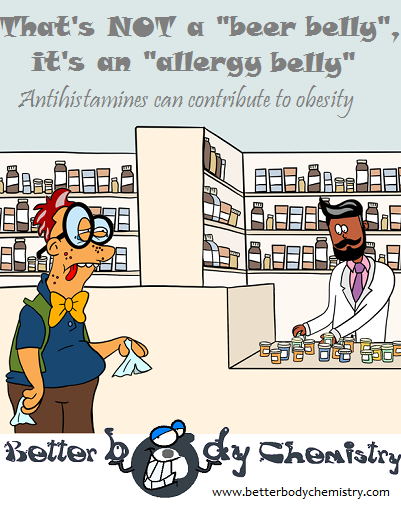 Antihistamine pills are considered benign, so you don’t need a script, to get your hands on one – but, the evidence is growing, regular use, can impact your waistline

It’s that time of the year and your allergies have flared.

No worries.  You pop off to the local pharmacy to buy a little relief.  The go to treatment, to manage allergies is an oral antihistamine.

There are quite a few options to choose from.

In most countries, you don’t need a script from your doctor, to purchase one of the second generation, non-sedating antihistamines.

Could this ritual, be one of the reasons, you’re putting on weight ?

The gurus will say….  of course not !  The problem is that you  eat too much and move too little.

But, a team of researchers, based in Texas, had a hunch that anti-histamines could be contributing to the obesity epidemic, so they did a little digging.

Now the idea that antihistamines could be a problem, was  sparked by an observation, that mast cells in the gut release histamine, and that this histamine, opens up the lymph vessels, facilitating the movement of  lymph out the gut. 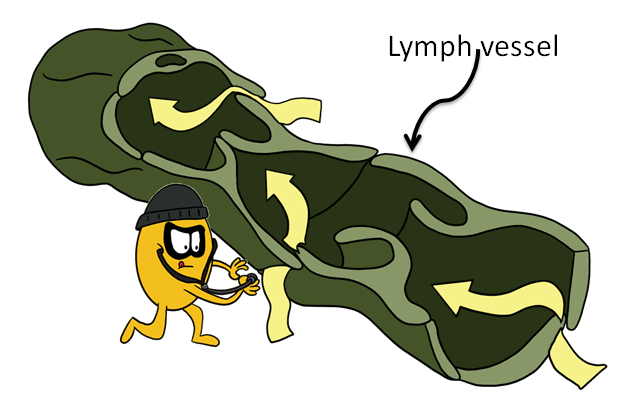 At first glance, this is not all that interesting.

After all, the gut plays a big role in immunity and  lymph is the conduit for immune cells and histamines ARE associated with OUT OF CONTROL, immune cells.

But, lymph is ALSO the conduit, for dietary fat.  Surprised ?

The less than grand entrance

It’s not something talked about too often, but very little fat, actually arrives, via the front door. Sugars and amino acids,  on other hand, always use the front door, so they’re subject to processing by the liver.

But fats, skip the beady eye of the cells in the liver, and go straight for the jugular. Literally !

NOTE :  Short and medium chain fatty acids do – this is why they can be good, when your brain is dealing with an energy crisis and struggling TO THINK ! Click here to learn more.

In fact, the cells that have first dibs on the  dietary fat supply, are the heart and lungs. They get to skim off the top and only what is left, circulates to everyone else,  the liver has to wait. 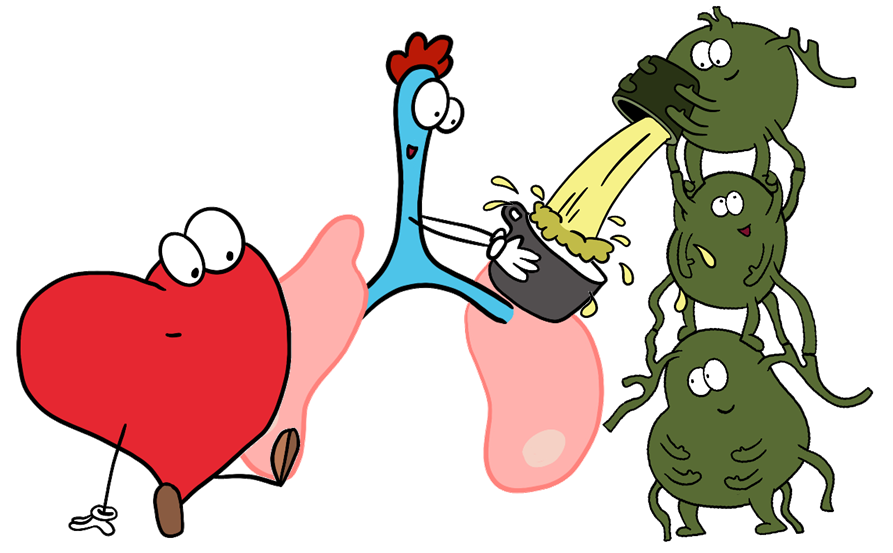 It can be a LONG wait.  Insulin arranges for the fat cells, to take up these fats, the liver gets what are called, chylomicron remnants. Think empty sacs !

Now the fat, that they are getting their sticky little paws on, is packaged in structures, known as chylomicrons.  They are ENORMOUS, blobs of fat, carefully assembled by the cells that line the gut, following fat digestion.

The chylomicrons are popped into the ethers, where they drift into lacteals, blind ended lymphatic vessels .

Blind ended – this means, they don’t have any obvious “doors”.

Getting in and out is challenging, especially after dinner

Because this is, when there is an increase in GIT lymph formation and flow.  Plus, the regular phasic contractions, inside the lymph vessels,  decreases. It’s as if, mesenteric lymphatic vessels go into an energy saving mode, they  pump less.

Moving fat away from the belly

So after dinner, mast cells step in,to get things moving……… they fire off a few rounds of histamine.  And this facilitates THE FLOW, because histamine’s super power, is getting vessels open.

Histamine moves and shakes those lacteals.

So, when you incapacitate, by swallowing an ANTI-HISTAMINE PILL,  the fat moves are changed,  postprandial absorption of lipids from the gut, is impeded.

The BAD fat, is the fat, that hangs onto your belly !

So keeping it there, might not be such a good idea.

Our team,  put the idea to the test, when they put young healthy,  Sprague Dawley rats, on an antihistamine treatment  plan, for 16 weeks.  Now, the rats were not SET UP, to GET FAT.  They ate, ordinary chow, which amounts to 10 % of calories,  from fat.

The rats took desloratadine, this drug,  is classified as an H1 receptor blocker.  This is the antihistamine, that is the active ingredient in Clarinex® and Aeruis® pills.

The dose the rats took, was 50 ug/kg body weight, which would be, on a par, with  one 5-mg tablet, taken once a day by a patient.

The rats taking the antihistamine….. GOT FAT !

Here is a photo of the little “blobs”. 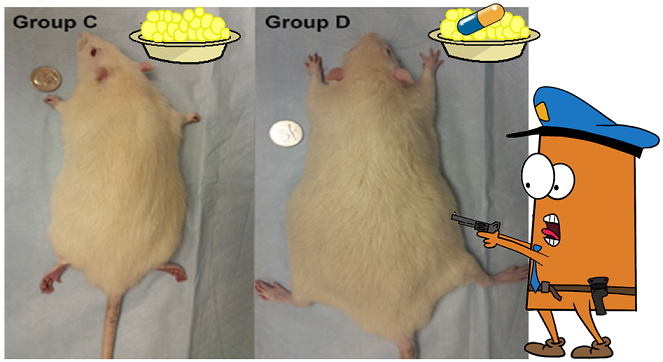 NB. They managed to do this, on a non “fattening” diet !

The problem, manifested, early in the study, already  at the 2 week mark, they were fatter than their “friends”.   And as the study continued, their weight problems, persisted. 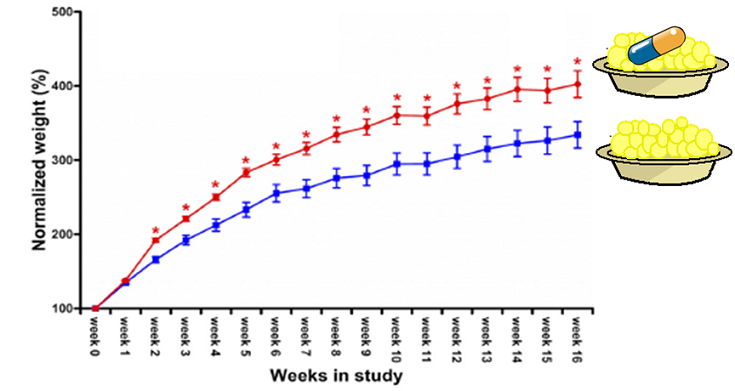 Unsurprisingly,  along with the extra weight, came metabolic troubles – sugar, LDL cholesterol and triglycerides were up.

Are rats relevant ?  Some would argue not.

But, as early as 2010, there was epidemiological evidence to suggest, antihistamines were contributing to the obesity epidemic. The evidence has continued to growth.

So they’re not as benign as we THINK.

Go easy on the allergy meds

Granted, the newer ones, don’t make you sleepy, because they don’t get inside your head, but they are not without consequences.

I realize, if you have body chemistry issues, they may sometimes be necessary, but they should be plan C or plan D and only be taken when they are absolutely necessary.   They could be an unwitting saboteur in your quest “to be skinny”.

NOTE :  At this stage, there is no science, that has looked at whether the timing of these meds, might matter. Logic says, the worst time to take them, would  be with a fatty meal. If you must, take them……… consider taking them outside of meal time.

When you’re insulin resistance the quantity and quality of saliva, you’re producing, is altered – this has bigger health consequences, than a bit of dry mouth

Could your dishwasher be making your family allergic ?

Handwashed dishes are “dirtier”. Don’t panic. They’re not a health risk – the extra bacteria can help seed your gut microbiome so you avoid allergic conditions

Low vitamin D levels don’t CAUSE allergies BUT allergic types avoid outdoors and so avoid the sun (vit D) and so increase chances of suffering from an allergy.