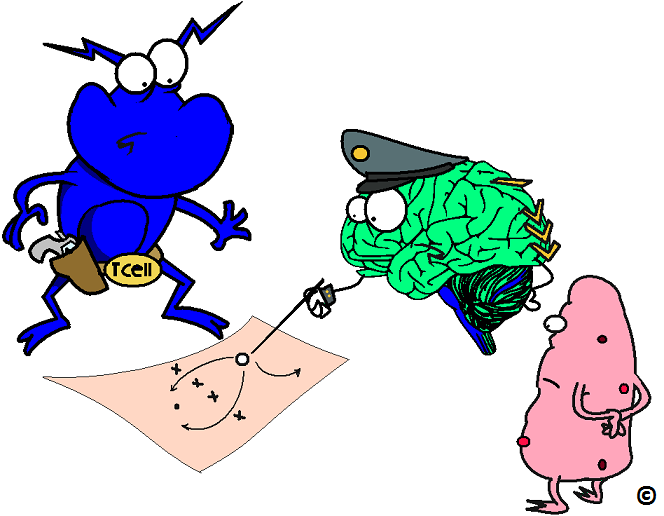 The human immune system is a powerful ally, but at times it can feel more like the enemy than your best friend.

Feeling flu-ey, can sometimes feel almost as bad as actually having the flu. This flu-likey feeling is one of the biggest drawbacks of vaccines.

The acute phase response flattens EVERYTHING

The immune response responsible for flattening you, is the acute phase response.

The acute phase response is the like the alarm bell ringing down at the fire station – it is waking up the troops. A whaling siren is ALWAYS going to be stressful.

The mad scramble of the troops brings on a series of body chemistry changes, which further dials up stress in the body. The normal peaceful body quickly turns into a war zone. It is this state of angst which brings on the flu-ey feeling.

The cost of going to war

Going to war is costly – the stress response puts healthy body cells in the firing line.

The question is why ?

Researchers believe the body is playing war games – they have nicknamed the strategy “Immune brinkmanship”.

The body is betting it is just that tiny bit tougher, than the invader. It knows, the systemic stress is likely to rattle the home base, but it is counting on the upset causing more damage to the invader.

This strategy is sometimes used by modern day “war lords” too, not the shoot them up ask questions later guys, but the captains of industry battling over lucrative trade routes.

Company A drops the price of their product way below company B. Both companies take a hit, but company A believes its opponent will be hurt more. More often than not, they’re right, company A weathers the storm, company B goes bang – and then of course, the price goes up, up and up because “THERE IS NO COMPETITION”.

Why the bugs are expected to take a bigger hit

The acute-phase response centres around making invaders seriously uncomfortable. The neighbourhood becomes hot as Hades and vital nutrients such as iron, zinc and manganese are squirreled away, as the desire for food is suppressed.

It is hard to divide when you’re hot and hungry ! No matter whether you’re a bacterial or a human cell.

But victory for the pathogen depends on dividing. Human cells can hold off dividing until things return back to normal. An invader usually can’t.

Human cells win, invaders lose. Particularly when you add the direct pummelling being experienced by the invader as the troops arrive, hot and hungry is the final kick in the pants.

It is still a risky strategy

Self-harm is inherently risky business – it requires careful monitoring of the situation to ensure you don’t cross the line and shoot yourself down.

Successful pathogens often cause the body to do just this. They use tips and tricks to turn the body against itself, leaving the body on fire.

A classic example is what happens when you catch a cold. A cold virus causes a over reaction in the upper respiratory tract, the damage creates fertile ground for a bacterial invasion. Sniffing and sneezing evolves to bronchitis and pneumonia.

The danger of living on the edge

Existing in a state of war is helpful in the short run, but seriously harmful in the long run. This is why nonlethal harassment is deadly.

Today, many body’s are permanently at war – often times the enemy is not actually real. The body has got its wires crossed and is attacking bits and pieces of itself.

Getting the 7 Big Spoons™ sorted, is one way to help your body run the war room well.

Turning Up The Heat: Immune Brinksmanship In The Acute-phase Response. The Quarterly Review of Biology, 2012; 87 (1): 3 Edmund Kenwood LeGrand, Joe Alcock

Interested in learning more about the chemistry of war ?

Subcribe to E-spoons, to get e-mail updates once a month to learn how to keep your body chemistry working for you so you can win at the war games.

Did you learn something new or do you have a different perspective ? I’d love to hear from you so