The benefits of melatonin 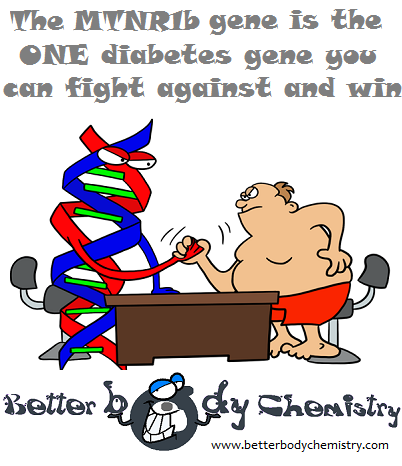 The MTNR1b gene has been identified as a diabetes gene. People with this gene are super sensitive to melatonin and this impacts insulin production

Type 2 diabetes IS IN YOUR GENES.  Ouch !

But genes are NOT DESTINY, all they are is a predisposition to TROUBLE.   Of course, if you’re predisposed, it does mean you’re at risk……

So you’ve got to tighten up your “LIFESTYLE”.

You MUST strive to eat right,  cut back on the processed junk food and JERF,  just eat real food.  And get off the couch and get moving.  Finally, you need to prioritize your SLEEP !

Others maybe be able to do the 24/7 lifestyle, but if you’re carrying a particular version of a  “melatonin” gene,  you’re not going to be able to do it, without paying a price.

Is one that responds to the hormone melatonin,  your own personal night valet,

sending you off into dreamland, every night.

Well that’s what he is supposed to do. 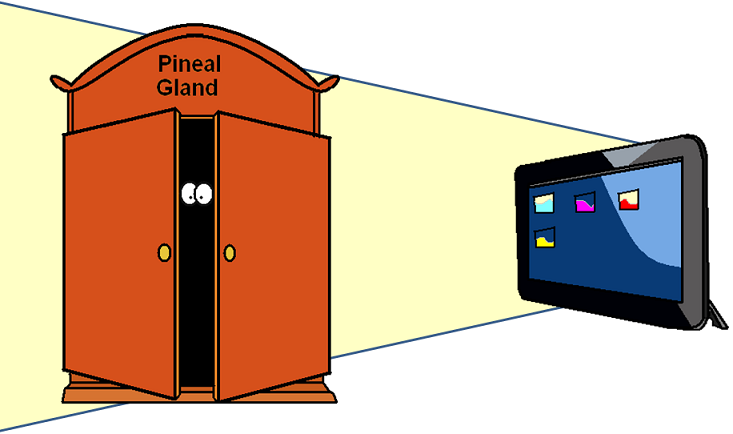 He is a bit of a cowdy custard. Exposure to blue light keeps him cowering in the pineal gland.  He will only put in appearance, once you power down your electronic devices and dim the lights.

Getting you ready for bed

Is actually quite a BIG JOB.

It involves a lot more than just removing your make up and brushing your teeth.  It requires a complete change in staffing,  day time enzymes, knock-off for the night and a skeleton staff, comes on duty.   To avoid chaos, there needs to be a co-ordinated hand over.

This is what melatonin does. 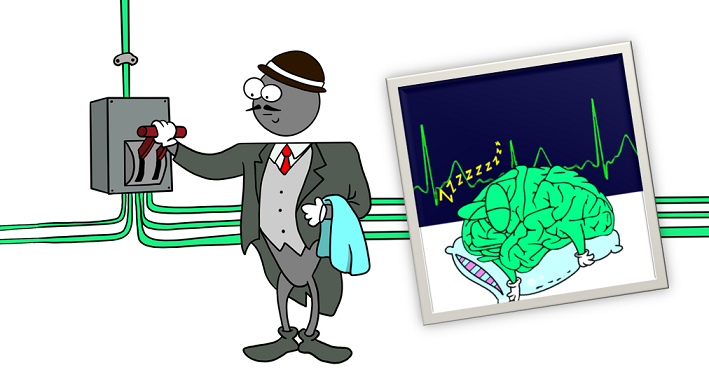 His exit  from the pineal gland pulls the switch in the central nervous system, signalling it’s time to get some shut eye,  but melatonin doesn’t only work in the brain.  This is where that MTNR1b gene, comes in… 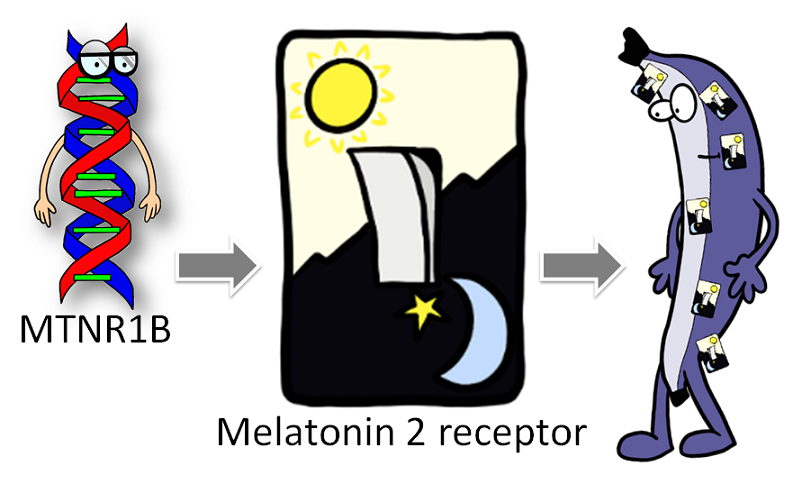 Small quantities of melatonin leave the brain and move around the body, systematically turning these on.

The  switches are located all over the place, including  the pancreas.  Beta cells,  these are the guys that make insulin, also make melatonin two  switches and stick them on their surface.

A team of researchers from Finland,  have established what makes this version of the gene,  risky,  it‘s a prolific switch maker.  In biological speak, this is a gain of function, mutation, meaning it works better than normal.

NOTE : This is in  stark contrast with the situation most often found with problem genes – where they are duds, that is  there has been a loss of function mutation.

Beta cells expressing this gene  have  LOTS of functional switches.

On paper at least, this gain of function should be good news and provide a genetic advantage. The benefit comes because  when your night valet shows up.  It’s going to be a whole lot easier to locate the switches in the half life, if there are lots of them.

People inheriting the gene, are extraordinarily sensitive to melatonin’s presence.

Melatonin just has to look at the cells and insulin production ceases.

The night shift runs on fat

Only when insulin goes to bed, does lipolysis, that is fat burning  really get going. 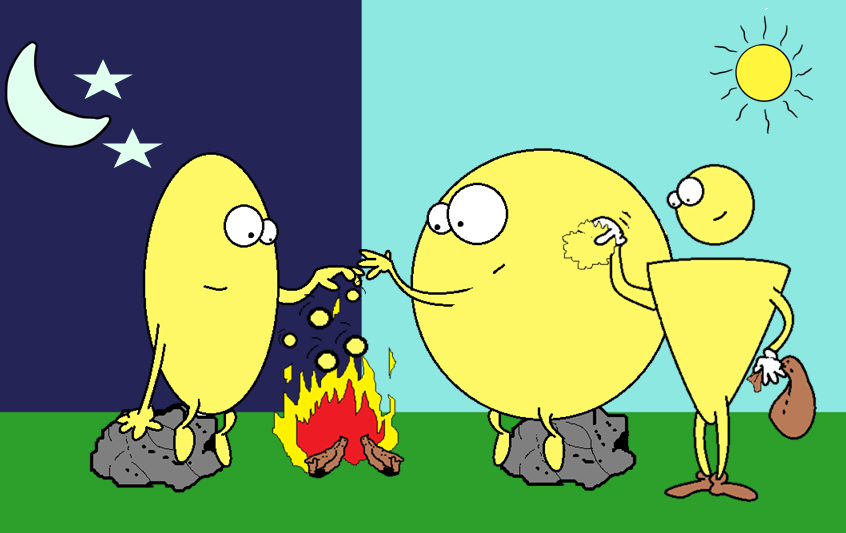 Inheriting this gene, should make you a fat burning machine. Yah  !

Of course, there is a caveat to this, you do need to be getting enough SLEEP and you need to be insulin sensitive.

So what if this is not happening ?

The insulin off switch is not triggered

Well the absence of melatonin, means that the off switch is not triggered.  Beta cells  continue to pump out insulin,  NIGHT and DAY.   The NIGHT insulin  is highly disruptive, because you end up running day time chemistry ALL NIGHT.  Instead of switching on your rest and repair pathways, you’re GOing and GROWing, 24/7.

And the fuel source you use, to achieve this,  is  primarily sugar.

Fats just aren’t in high demand – they end up in storage.  And as the fat stores build up, adipocytes become more and more uncomfortable and stressed out, while you accumulate more and more layers. Eish !

This kind of chemistry, it’s is not sustainable in the long term.

At first, insulin production is stepped up to meet the demand,  but if the pattern continues, the break downs can be catastrophic.

So the take home message……….

But this  is not enough,  you must RESPECT SLEEP TOO. 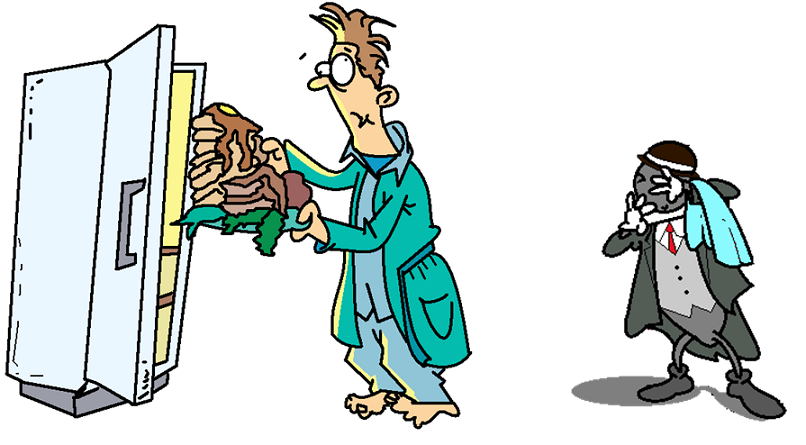 When THE night valet is around, DO NOT EAT !

This is especially important if you are using melatonin as a sleep aid.   Melatonin and FOOD, don’t go together, particularly if you’ve been “blessed” with a super sensitive MTNR1B gene.  You must keep melatonin and insulin at a distance to create BETTER BODY CHEMISTRY and BETTER HEALTH.

Your mobile device is scaring away your night valet

If you want to avoid a sleepless night, you need melatonin to tuck you into bed, but your night valet is technophobic – so dim that mobile device at bedtime.

Not sleeping in the dark, might be making you FAT

You’re a regular Jo, most nights, you climb into bed and ……………you’re off to dreamland. Sleep issues don’t explain your weight problems. Not so fast…….

Pancreatic clocks tick better when spend time in the dark. Unfortunately, being IN THE DARK, doesn’t always happen, light at night is commonplace. 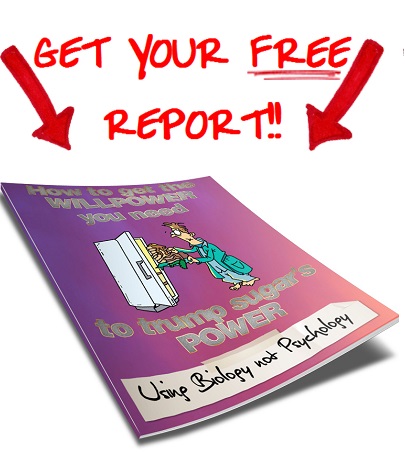